Photos of the FWC 2021 are available here.

The final results were:

The organizer, Andrea Pavan, commented the background of the event and future of Italian FUBA community:

Everything started during preparations of VenCon (Venice Convention Historical Simulation Games) on August 28th. We organized a table dedicated to FUBA with Subbuteo teams and it was a success. With the enthusiasm of some friends we decided to organize the Italian SNAFU CUP FUBA through the DISCORD SNAFU channel via Vassal. As many as 16 teams have signed up organized in groups of 4 teams, over 100 hours of games for 31 games in total. This time, thanks to the solid support of the participants, I decided to raise the stakes and try to structure a real FUBA ITALIA LEAGUE also open to international membership. In fact, we have 18 teams registered, 2 of which are Finnish and 1 English. We are waiting for you!

FUBA World Cup 2021 is now over, unfortunately the turnout was somewhat limited due to pandemic and whatnot, and my personal success was meagre as well. But I thought I could share my plans for tournament – even if it is probably mistake to open up my super secrets and coaching tips.

I wanted to make 5 forward tactics to work, and after some testing, I figured out that the 4-1-5 formation felt the best for my playstyle. As it turned out that we could select at least most of the skills for the tournament freely, I could start planning from the formation, and select skills to fit the game plan.4-1-5 gives even more offensive power than 4-2-4 which I have used for some success. The fifth forward is crucial to overpower 4-defender line, and easiest way to get that is to weaken the midfield. 1 is often waayy less than 2, but that I would have to just suck up.4-1-5 is not necessary a thing in the real fooball, but I imagine that it represent greater attacking responsibilities of midfielders, something akin to 4-1-4-1 or 4-1-3-2. FUBA is an abstraction after all. See the picture.Should my game plan go horrible wrong in the first 1-2 matches, the backup formation would have been 4-5-1. It was not needed.

First skill I selected was my personal unique prize skill #9, which saved attack zone condition points on 4+ when used. That would give me a lot of leeway to use points even when that was not necessary really needed.Second one was Gegenpressing, a really powerful skill which unfortunately burns condition points at voracious pace. But that should give me more time to keep the play in the opponent’s end of the pitch, letting me use my 5 forward movement advantage.The last skill was Fast defender to give me some defence against fast running teams. I think i did not use that even once during the tournament, but it was a pretty good backup.We got one random skill, and I got Trained special event, which fit in rather well in my game plan, and there was certainly some synergy with the Gegenpressing.I ended up getting two more skills through the events, Strength in depth (really fortunate, a great skill) and Fiery coach (funny, got that during my unfortunate loss against Jari K.).

I spread condition points 4-2-4, the idea was to use forward points aggressively as much as possible (see skills) and save defensive points to counter dangerous attacks. The midfield points were reserved to soak up fatigue checks and occational high reward aggressive pressing.It is possible to drop only one point from the attacking zone, so I was pretty much stuck with 4 points there.

Defensive plan was to keep disciplined defensive line of 4-6 players, preferably high (in the center zone) and make it difficult to get in to the box. It went rather well during the tournament, I think there was only few attacks reaching my penalty area during all the five matches. The aggressive pressing was used to stop the nasty counter-attacks and take easy balls surely. The main defensive tactics was of course to keep the game as much as possible in the opponent’s side of the pitch. The offensive plan was to build attacks from the defensive zone, letting me use 4 movements. 1-2 players, supported by goalie would keep the ball in the defensive zone while moving rest of the team towards the attack zone. If opponent tried to give some pressure in the defensive zone, all the better as some of their players would be in wrong place when I moved the game forward. If there was no pressure, I would dribble the ball up to midfield, but not before I had enough players on the opponent’s side and the ball safely enough on my possession. Then I would pass to the side or put a long ball to the corner, depending on the situation. My idea was to get four (or more) players outside of the box (usually opponent’s had 6 there) and get the ball to the corner with 1-2 players. I was not worried to have a high ball value as I had Gegenpressing to win the ball back should I lose it. When I was in the corner, I could use my 5 forward move to fill the box, and with luck get even more players there than my opponents. Then it was just a pass to the box and scoring, again with Gegenpressing backup if necessary. Pretty simple, and at times (against teams with weakish defensive tactics) very effective!

On Sunday, 28th of november four friends met to play the fourth edition of the Basque Cup of Fuba in Bilbao (Basque Country), in “Zona Cero” games store. We played two rounds, semi-finals, 3rd and 4th position match and the big final. In the semifinals Egoitz was able to beat Jon Ander, 2-0. In the other semifinal Aitor Galda beat Imanol 3-1. In the last round, Imanol was third thanks to penalties. In the final Egoitz won 1-0 to Aitor in an equal game.

3rd version of the rulebook is now published. You can download it here. The third edition is also available as a boxed version at www.upgames.fi.

One step again closer to the real football. 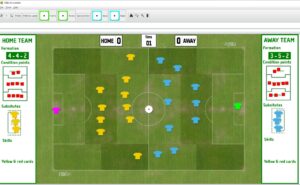 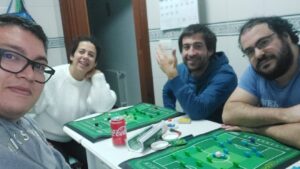 On Sunday, december 6, in the middle of the covid pandemic, we met 4 friends to play the third edition of the Basque Cup of Fuba in Derio (Basque Country).We played two rounds, semi-finals, 3rd and 4th position match and the big final. In the semifinals Egoitz was able to beat Oihane with a tight 1-0. In the other semifinal Aitor beat Alex 2-0. In the last round, Alex was third thanks to penalties. The final was also decided by penalties. After failures on both sides, Aitor beat him 4-3 on penalties and won the basque tournament

Next year we will get together again to play the IV. Basque Cup of Fuba and next time we will try to encourage more people and apply the updated rules. 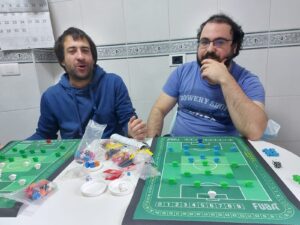 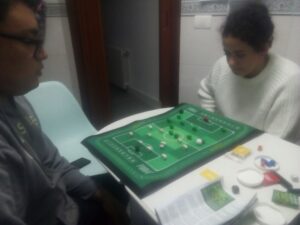 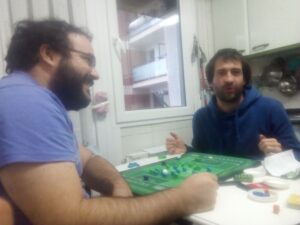 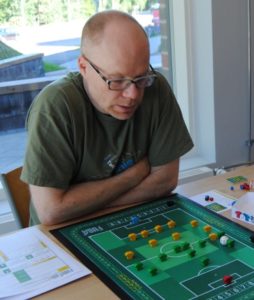 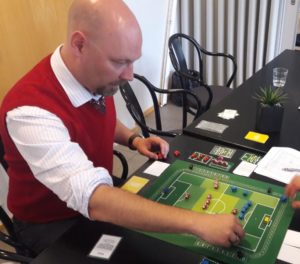 The rulebook version 2.2. is published with a new layout. Also skills cards are updated. Both of these are available here. 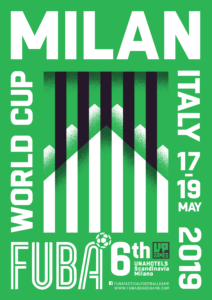 FUBA World Cup 2019 will be held in Milan! The event will take place in UNA Hotel Scandinavia. More information available at the event page. It will be first time FUBA World Cup is organised outside of Finland. We have also scheduled Italy – Finland test match for Friday evening.