FUBA brings a realistic football match to your gaming table. It’s a game of tactical skill that includes all the important details of football. You must make the vital decisions faced by real coaches and lead your team to glory or defeat. Which formation will you use, 4-4-2 or 4-5-1? When is the best time to make substitutions? Will you attack with short passes or crosses into the box? Do you have a well-organised defensive line or do you use a sweeper keeper? Make your choices wisely and develop winning tactics to outfox your opponent!

In FUBA, you compete head-to-head at the tactical level and simulate the most important events in greater detail. Outcomes on the pitch are decided by dice rolls and your decisions affect the odds of your team’s success. A typical match contains roughly 40 turns. Players choose actions for their teams, like where to play the ball, move players, press or block passing routes, when to shoot etc. In your first few matches you will learn the rules, but as you play more you will develop your tactical skills. To beat your opponent you will need to have a good game plan and successfully react to your opponent’s tactics.

The rulebook is divided into two parts. The first part has basic rules for learning the game while keeping game play simple. The advanced rules bring in all the details of the game: player substitutions, fatigue, sweeping goalkeepers, offside risk, player skills, injuries, and even the chance of a streaker!

Somewhere year 2008 a first draft for FUBA was introduced. A bunch of new ideas to simulate a full football match in a game board from a tactical point of view. Initially FUBA was played among the designers’ and their friends, but after some years the first version of FUBA was published in 2013. The game development did not stop to that point, but the game design continued to improve to game to get more and more close to real football. The 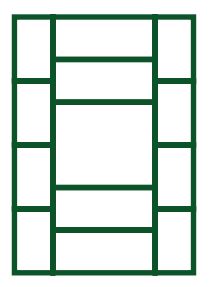 3rd edition of the rules were published in 2021, based on worldwide feedback from hundreds of games.

FUBA is based on following ideas: